[37] The Church of the 2NC, the Lords' Witnesses, the 4th True Christian Church, the Church of 1,000 corrected mistakes, Institutional Papal fallibility 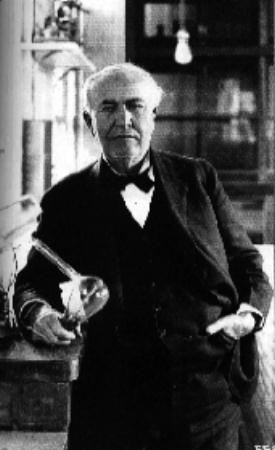 Edison is quoted as saying it would take a matter of a few weeks to invent the bulb. In reality it would take him almost two years of failed attempts, new discoveries and prototypes before he would find success. It is said he tried over 6,000 different carbonized plant fibres looking for a carbon filament for his light bulb. By concentrating on inventing a whole lighting system rather than just a single light bulb Edison succeeded where others had failed. Edison chose to look at the big picture and created a lighting system including wiring plugs connectors etc. to operate more than one light bulb at once (www.graceproducts.com).

5 And the light is shining in the darkness, but the darkness has not overpowered it (John 1).

The reporter said to Edison: Mr Edison, how many failures have you had so far with this light bulb of yours? Edison answered: around 5,000. The reporter then asked him: Would you therefore not agree that you are the biggest failure in this field. He answered: Yes and I am therefore the nearest to success. I am 5,000 steps nearer to success than when I started.

Edison understood that success is the result of how you deal with failure. Every failure which you recognise is a step on the road to success.

1 Faith is the assured expectation of things hoped for, the evident demonstration of realities though not beheld (Hebrews 11).

Putting this in more modern parlance: Faith is having the courage of your spiritual deductions. Spirituality is seeing with the eyes of your mind what cannot be physically detected.

1 Consequently I entreat you by the compassions of God, brothers, to present your bodies a sacrifice living, holy, acceptable to God, a sacred service with your power of reason (Romans 12).

13 Hence brace up your minds for activity, keep your senses completely; set your hope upon the undeserved kindness that is to be brought to you at the revelation of Jesus Christ (1 Peter 1).

You cannot sub contract out this God given duty! If your convictions are other people's deductions then you are an idolater of them. True faith involves living by your deductions, which result from your spiritual vision.

And even when we have found the truth, Jesus commands us to...

So it is a never ending process of exploring new understandings and refining old ones. Every day we make choices which exhibit to the angels and to ourselves the strength of our faith. Now if we get real for a moment, no one actually seeks God perfectly. Nearly everyone just throws away their reason when it comes to the holy book. The bible is hard to understand. But this is not because God has a problem in explaining his plan to us. It is because God has deliberately hidden his plan in a sea of apparent ambiguity, in order that he can reveal it when he wants to reveal it and to whom he wants to reveal it. He reveals it to a selected few, who love him sufficiently to understand that he wants to tell them everything, but that he has to do it in such a way that the bad guys will not see it and will not therefore be able to set up false churches on the basis of his truth. The scriptures are written in such a way that they only reveal God's truth to genuine people.

In fact God detests the exploitation of his divine truth for commercial gain or for personal aggrandisement. It is better to be an atheist than a peddler of the word of God. He has hidden the divine beauty of his plan very carefully, in order to prevent people abusing, exploiting or prostituting this beauty for purposes other than saving mankind. This indeed is the meaning of the famous words of Paul...

12 For the word of God is alive and exerts power and is sharper than any two-edged sword and pierces even to the dividing of soul and spirit, and of joints and [their] marrow, and [is] able to discern thoughts and intentions of [the] heart (Hebrews 4).

4 if you keep seeking for it as for silver, and as for hid treasures you keep searching for it,
5 in that case you will understand the fear of Jehovah, and you will find the very knowledge of God (Proverbs 2).

Since this is the time of enlightenment, let us explain the fear of Jehovah. It is not a fear of a cruel wicked ruthless tyrant, such as Saddam Hussein, Adolf Hitler or Attila the Hun. It is the fear of an omnipotent genius who sees everything you do and knows you better than you know yourself. It is the fear of not being able to withstand total scrutiny of your actions by a person who not only exhibits but will eventually require from you, perfect righteousness. For you are his son or you are his daughter. But this fear is trumped entirely by the fact that he loves you more than you love yourself, as well. He is simply the best Dad that anyone could ever wish for! So hey, tell me off! Our love for him can easily conquer our fear of him. John, the one whom Jesus loved, explains it all perfectly...

18 There is no fear in love, but perfect love throws fear outside, because fear exercises a restraint. Indeed, he that is under fear has not been made perfect in love (1 John 4).

Can a true church make a doctrinal or interpretational or prophetic mistake?

22 When the prophet speaks in the name of Jehovah, and the word does not occur or come true, that is the word that Jehovah did not speak (Deuteronomy 18).

Every bible researcher makes mistakes. We are interpreters of inspired utterances. But our interpretations are not themselves inspired, that is the distinction which people fail to make. So we do not speak in the name of Jehovah, in the sense that we are speaking his inspired words. Instead, we attempt to understand the inspired words of those who have spoken in his name. If on the other hand we said, as many false religions have, that the angel Gabriel came to our leader in a dream and told him that there were 3 master salvation covenants, and that is why we have the 3 salvation covenant understanding, then we would have claimed to be speaking in the name of Jehovah, and so if this interpretation was later found to be incorrect, then we would be a false prophet.

God has never directly told Gordon, or Tony, or Massoud or Lee, or Dave or Jeff or any other LW, what any scripture means. The LWs are actually the church of 1,000 corrected mistakes. That is why our understandings are so good. If we believed in papal infallibility or in direct revelation, then we would imagine ourselves to be incapable of making any mistakes, and therefore we would not be able to do any bible research, which by definition is a step into the unknown and is therefore a catalogue of mistakes. In fact the sick doctrine of direct revelation is what has held most churches back in understanding of the bible and kept them in dense darkness for the last 2,000 years.

Let us be candid. There is very little or more likely no direct revelation of church doctrine or of prophecy today. All the inspired utterances that God wants mankind to hear are in the holy book. God can help us in many ways today (including inspired dreams and visions) but direct revelation went out with the death of the last person touched by the hands of an apostle, which was the end of the passing on of the physical gifts of the spirit - see I22.

So today the true interpretational prophet is the bible researcher who is genuinely trying to improve his understandings and therefore is always prepared to admit that he might be wrong. His prophecy is the extent to which he advances true bible understanding. Anyone who does this without claiming direct revelation must be a true prophet. The false prophet today is the person who claims to be the true prophet of yesterday, i.e. he claims to have direct infallible revelation. Nobody has had this since the 2nd Century AD..

The LWs are the church of the 2NC

Interestingly no other church presently claims that there is a second new covenant on the internet. So the LWs are unique in this claim (although the hidden church of Laodicea with the Watchtower do accept the 2NC).

It is well known for church members to repent from sin. It should be equally well known for church administrations to repent from false doctrine and false predictions and false understandings. That is now the church of Mary, the one who sat at Jesus' feet, advances in understanding. The journey from the darkness to the light is not a one step process. It is a multiple step research process. And when you take a step into the darkness, you often trip up and fall over. So the understandings of the true research church of Mary should improve every day. Their constant feature, their evening and morning sacrifice, should be a new or improved understanding or a discarding of an old incorrect understandings. For the show bread was replaced every Sabbath. It did not just sit there for 500 years as an 'apostolic creed'.