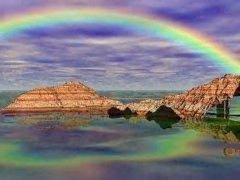 17 Cursed is the ground on your account. In pain you will eat its produce all the days of your life.
18 And thorns and thistles it will grow for you, and you must eat the vegetation of the field.
19 In the sweat of your face you will eat bread until you return to the ground, for out of it you were taken. For dust you are and to dust you will return (Genesis 3).

Adam did eat its produce in pain all the days of his life, but the curse on the ground did not extend too long after he died for it was lifted when the earth was baptised in the flood. Because Lamech said of Noah:

29 This one will bring us comfort from the pain of our hands resulting from the ground which Jehovah has cursed (Genesis 5).

And Jehovah said after Noah had made his offering to him:

21 Never again shall I call down evil upon the ground on man's account [regrettably this does not stop him calling down evil on the ground due to Satan and his dragon], because the inclination of the heart of man is bad from his youth up. And never again shall I deal every living thing a blow just as I have done.
22 For all the days that the earth continues, seed sowing and harvest, and cold and heat, and summer and winter and day and night will never cease [the next calling down of evil is shorter than a 6 month Hebrew season in duration] (Genesis 8).

This statement implies that these things did cease in some way during the flood (this was because the flood of water lasted more than a year). Whereas the flood of lava lasts for only 40+40 days. It starts on 2021Iyyar14 and ends on 2021Ab4. 50% of saved mankind remains on the planet during the flood. In other words we cannot be sitting in the ark for long enough or walking on a lava flow long enough to miss a 6 month Hebrew season as a generation. In any event this is a covenant not to curse the land again and it would be pointless to enter into such a covenant if in fact the land was still cursed, for this would render the covenant meaningless. So the flood ended the physical land curse, basically it 'baptised' the planet. However the land was not blessed at that time. There are three states for land, in fact for anything, and these are blessed, cursed, and neither of the above. For instance those under law had the benefit of the blessing and the penalty of the malediction, but those not under law had neither.