[192] Matthew 20: 5 Calls to work in the householder’s vineyard. The Householder left the Vineyard 5x to hire a new set of workers, a new true church congregation

1 For the kingdom of the heavens is like a man, a householder, who went out [of a previous true religion - the Pre law church of the NAC to hire saints into the JAC under law] early [in the morning] to hire workers for his vineyard.
2 When he had agreed with the workers [to be paid] out of [ek] a denarius [genitive], [for] the day, he sent them forth into his vineyard.
3 Going out also [of a previous true religion] about the 3rd hour, he saw others standing [Christian Proselyte Call into the 1NC, rather than Jewish call] unemployed in the marketplace,
4 and to those he said, 'You also, go into the vineyard, and whatever is just I will give you [when you are spirit sanctified then what is just is an angelic resurrection].'
5 So off they went. Again he went out [of a previous true religion] about the 6th and the 9th hour and did likewise.
6 But, about the 11th [hour] he went out [of a previous true religion] and found others standing [Some already called at the 11th hour and Others yet to be called. Proselyte call, to those standing, i.e. with a water baptism, to start walking as a 2NC saint. These others are a further 11th hour call in addition to Zebulun], and he said to them, 'Why have you been standing here all day unemployed?'
7 They said to him, 'Because nobody has hired us.' He said to them, 'You too go into the vineyard.'
8 When it became late, the Lord of the vineyard said to his foreman, 'Call the workers and pay them their wages, proceeding from the last to the first.'
9 When the 11th hour [ones] came, they each received a denarius.
10 So, when the first came, they concluded they would receive more; but they also each received a denarius.
11 On receiving it they began to murmur against [kata] the householder [genitive from kata]
12 and said, 'These last [ones] did one hour, still you made them equal to us who bore the burden of the day and the burning heat!'
13 But in reply to one of them he said, 'Fellow, I do you no wrong. You agreed with me [wages] [Greek thinks it is cool to leave 'obvious' words out] of a denarius, did you not?
14 Take what is yours and go. I want to give to this last [one] the same as to you.
15 Is it not lawful for me to do what I want with my own [things]? Or is your eye wicked because I am good?'
16 In-this-way the last [ones] will be first, and the first [ones] last (Matthew 20).

Account starts Matthew 19:23 and ends Matthew 20:16. This is the only symbolic part.

6 In fact, Jacob's fountain was there. Now Jesus, tired out from the journey, was sitting at the fountain just as he was. The hour was about the 6th.
7 A woman of Samaria came to draw water. Jesus said to her: Give me a drink (John 4).

3 Just about the 9th hour of the day he saw plainly in a vision an angel of God come in to him and say to him: Cornelius! (Acts 10)

30 Accordingly Cornelius said: Four days ago counting from this hour I was praying in my house at the 9th hour, when, look! a man in bright raiment stood before me (Acts 10).

The 11th hour guys are paid before the 1st hour guys because the resurrection into the Kingdom of God as humans works in reverse order. The first ones (plural), who complain get a response to only one of them from the householder:

This Yes/No question means that at least one of the first ones did not agree this, in the word symbolic meaning. Compare these two scriptures:

1 For the kingdom of the heavens is like a man, a householder, who went out early in the morning to hire workers for his vineyard.

33 Hear another illustration: There was a man, a householder, who planted a vineyard and put a fence around it and dug a winepress in it and erected a tower, and let it out to cultivators, and travelled abroad (Matthew 21). (The story involves two fathers and two sons - ed)

The Successive Designations Principle tells us that the account splits into two word symbolic accounts. One for the designation 'man' and the other for the designation 'householder'. Now the word 'man' distinguishes one fulfilment from the other, so one fulfillment does not involve men, so it involves angels. So the two word symbolisms, are one for men and the other for angels (born again men).

Jesus was impaled at the third hour, then a darkness fell at the 6th hour and he died at the 9th hour, when the darkness ended and memorial tombs were opened. So the darkness in this symbolism is between FDS2 to FDS3, which is Christendom, the Christian Babylon period. Moses was sanctified and so was the line to Jesus (both sides - Mother and Father).

The big picture is:

12 These last put in one hour’s work, still you made them equal to us who bore the burden of the day and the burning heat (Matthew 20)

The expression: '11th hour solution' is used everywhere today, meaning a last minute solution, and it stems from this parable.

But the 11th hour is not the last minute, because the 11th hour is not the last hour of a 12 hour day, the 12th hour has this position in a 12 hour day. Understanding this is a key to understanding this parable. The eleventh hour workers worked two hours, the 11th and the 12th. They worked from 4 pm until 6 pm. 'The last ones' were therefore not the 11th hour workers but the 12th hour workers who bore the burning heat of Armageddon, and the burden of the day of Jehovah (the great and fear inspiring one) being the great crowd. In the parable, the first hour guys bear the day and heat because they work all day in the heat. So in the symbolism, their travails are ‘made equal’. Here it is:

It is an hour for a call into a spirit sanctification covenant!

The householder goes out of the old religion (pre law) and hires for the new religion the law, the house of Aaron and Moses, which ended on 33Nisan14:

The householder goes out of the old religion (the law which ended on 33Nisan14) and hires for the new religion TCC1, the House of FDS1 (appointed 33Nisan16 over all saints, it was appointed to feed them on 29Tishri10)

The householder goes out of the old religion (TCC1, which became the Roman Catholic Church. It fell on 84Nisan14) and hires for the new religion TCC2, the House of FDS2, the Gnostics (appointed 59Nisan20, to feed the ELCs and on 59Heshvan2 to feed the 1NCs)

The 4 spiritual calls therefore are as follows. The Jews become the Choose.
The Jewish call would be to God's covenanted people, who nowadays are proselytes since it is all by choice and no longer by genetics. So there is no greater Jewish call..
The Proselyte call is to those who choose to join God's covenanted people in a true church.
The Samaritan call is to those who worship in a manner which used to be accepted by God but no longer is. So they are in an ex true church.
The Gentile call is to people who are not presently worshipping in a true or an ex true church.

11 Only individuals from Asher and Manasseh and from Zebulun humbled themselves so that they came to Jerusalem.
12 The hand of the [true] God proved to be also in Judah to give them one heart to perform the commandment of the king and the princes in the matter of Jehovah.
18 For there was a great number of the people, many from Ephraim and Manasseh, Issachar and Zebulun, that had not cleansed themselves, for they did not eat the Passover according to what is written; but Hezekiah prayed for them, saying: May the good Jehovah himself make allowance for (2 Chronicles 30 NWT)

The householder goes out of the old true religion (TCC3 which fell as a true church on 2005Iyyar14) and hires for the new church TCC4, the house of FDS4, the LWs (appointed/installed to feed the 2NCs on 1996Nisan18 and the 1NC on 1998Heshvan2)

See [11]. The first hour guys (sons of the JAC under Law, the inferior wine of Cana that ran out) do indeed get a Denarius. This is entrance into the second Eden on earth as a non ageing human. The 3rd hour, 6th hour and 9th hour workers are not said to get a Denarius. And many of them do not, they get something else, 'whatever is just' - heavenly citizenship:

4 You also go into the vineyard and whatever is just I will give you (Matthew 20).

The 11th hours workers do get a Denarius.

The above is a pretty complete understanding of Matthew 20. We have basically reached the ocean floor as regards the depth of the symbolic meanings of the bible in the case of this parable - we think! The 3 parallel parables of the sower give us (30, 60, 100) x 4 + 100 times of call lengths for 13 calls in total - see U63. The Benjamin call into the 2NC for OMC sealing, to be an OMC 2NC King, runs from 2020Tishri20, the 4th HLC marriage, the wedding of Cana, when the water of the 4EC is turned into the wine of the 2NC, at 1NC Zoar, for 144 cubits/days of Revelation21 to 2020Adar14, the non religious FRC Passover. 30 days of that fall outside of 1NC Zoar and so are a call into 2NC Zoar presumably. Elijah comes down to the King in 2Kings1 not below him. Here is the rapture timetable for the saints...

The March of the Saints into the Vineyard

Omissions from the Parable 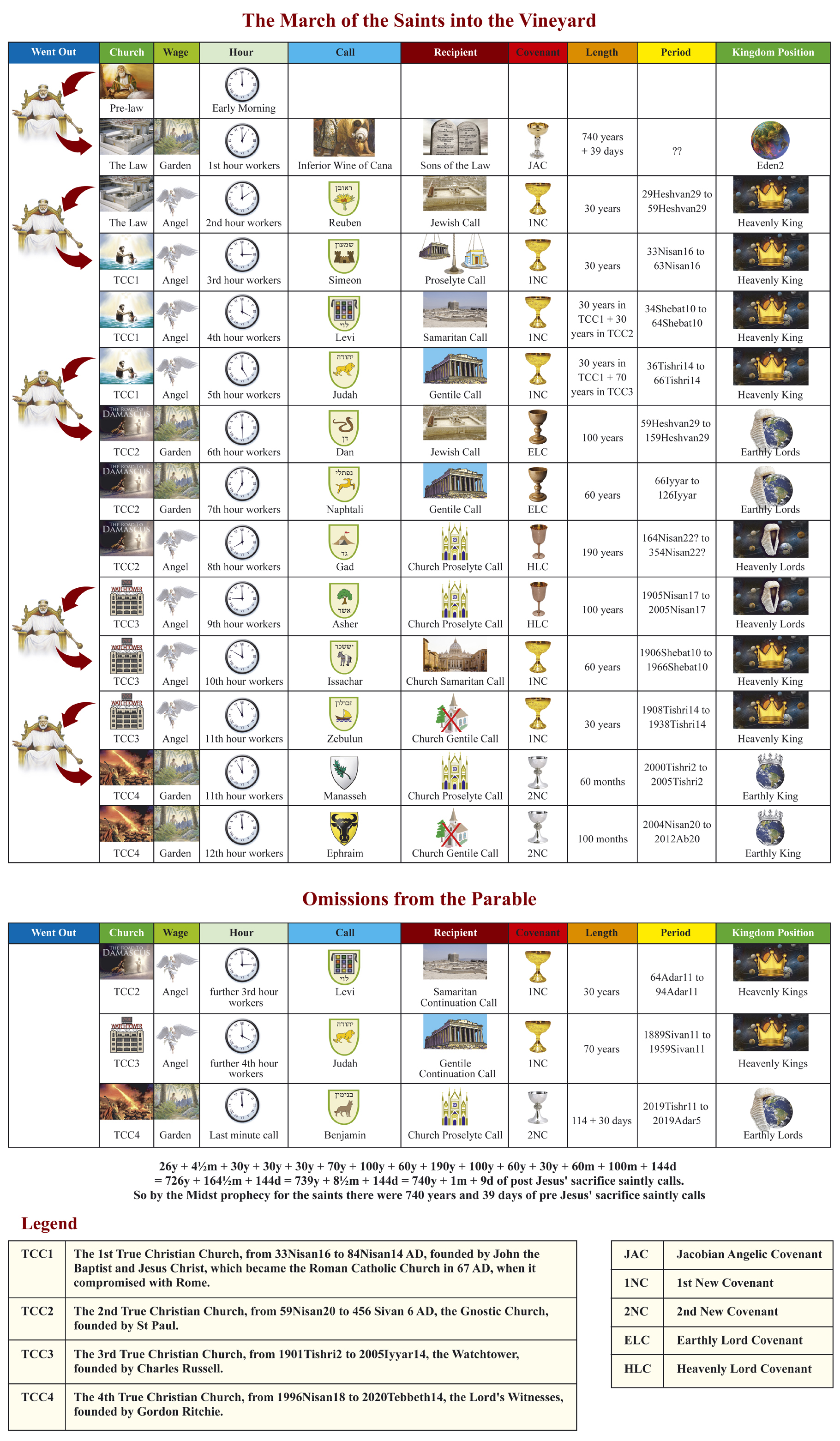